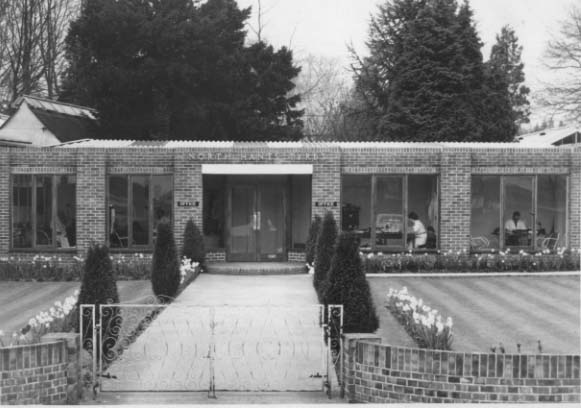 North Hants Tyres was founded in 1948 when my father realised that there was a market for tyres and second hand spare items that were hard to obtain in the post-war Britain. The small front room business slowly expanded until it encompassed the entire rear garden, a modern tyre remoulding plant being built there in 1952. North Hants Tyres became the largest remoulding factory in the south of England, even exporting abroad

My father’s passion for vintage vehicles gave us the idea for a new and challenging line of tyres. In the 1970s, old cars were cheap to buy and NOS (new old stock) spares were readily available, but the old stock tyres to fit these vehicles were often too perished to be used. So we looked to the USA, the Americans were already ten years ahead of us in the restoration of vintage vehicles and we established a link with Coker Tire Company in Chattanooga TN in 1978. Together, over the past decades, we have developed many of the old size tyres, including the 450x18 and 450x19 Commander (now Excelsior) and the 4755/500x18 BF Goodrich.

My father retired, and we decided to rent out the retail tyre business on Fleet Road Fleet, and specialised purely for the American, Classic and Vintage car enthusiast, and extensively widened our range of American accessories and service parts to cover the specialist niche market.

we were appointed European distributor for Diamond Back radial classics, wide white wall radial had just been developed that could withstand the extreme flexibility of a radial without splitting or turning brown in colour. Other products included in the range were a Redline, Goldline and a Blueline tyre. We were now able to offer a complete radial product list from 155/80R13 to 235/60R16 from stock, and with the option of special build tyres in 17" - 24" for customers with modern vehicles wishing to gain the retro look. In January to mark the new millennium we had another dramatic change We moved our whole business to our newly enlarged shop and stores to Avondale Road Fleet, now everything was all under one roof with one convenient telephone number.

In March we added our own private brand of Antique tyres "Excelsior". Initially 16 sizes ranging from 500/520x14 suitable for Morris Minor 1000, up to 500/525x21 for Lagonda's and Bentley.  Later the same year we introduced the "Excelsior" Beaded Edge (clincher Rim) range and it's the No 1 tyre for early Vehicles. North Hants Tyres and our partners continue to develop more sizes to the range, currently " Excelsior " is the largest private brand tyre in the world for the Antique Classic market.

A year when the " Excelsior Comp H and Comp V" name broke into the Vintage Racing tyre scene 4 sizes in the Triple Stud H rated (130MPH) and "E" mark approved and 29 sizes in the Comp V range rated up to 149 MPH.

January As we had steadily out grown of our Avondale Road warehouse in Fleet, so we were forced to look for a new freehold property. This was not possible in our home town, so we moved locally to a new 25'000 sq ft   warehouse in Ivy Road, Aldershot. We now have space to increase our stocks, meaning that we can offer a greater stock range on a next day delivery.

We were appointed as UK exclusive distributor for the Rocket Racing Wheel range, a name synonymous with 60's Muscle Car era. The range initially had 2 style of rims but grew quickly and now offers 5 Hot Rod / Muscle car designs as well as the Modern Muscle style for the late model American fitment

We continue to add stock items from our existing suppliers to build a comprehensive range of tyres in order to meet the increasing needs of our car enthusiasts.

Following a meeting with Galaxy we paid them to produce three working moulds, all ECE approved, for sizes that were difficult to find. Within six months we had exceeded their targets and since then, have worked closely with the factory to produce over forty sizes of RWL and WSW tyres. We are the largest dealer in Europe for these special tyres.

With the demand for wider wheels and larger mud terrain tyres we added the Comforser Mud Terrain tyres to our ever increasing product range. These tyres are available in 16” – 24” and from 30” high to a massive 40” tall tyre.

In June 2015, Discovery Channel was running the famous show “Detroit Steel.“ Following correspondence with Detroit Steel themselves, we were appointed main European stocking agent for their wheels.

T/T Classic Victory. This was the beginning of our own motorcycle brand, the T/T Classic Victory, based on the classic bobber style tread. The tyres were made to the same specification as the leading brand name at the same factories, but at prices that were competitive for the motorcycle enthusiast.

T/T Classic Roadmaster. The T/T range is extended to include an authentic vintage car pattern, using original mould designs purchased from an old valued customer. We are now producing ten sizes to date and will add sizes when possible, making sure they remain premium quality but at competitive prices.

March - North Hants Tyres are appointed as a UK distributor for the Wheelpros brands – we had been American Racing distributor for over twenty years, but now have added the XD Wheels, ATX Wheels and Helo which cover the 4x4 markets. Wheels for USA and European trucks and 4x4s which include the Ranger, Navara and L300. It also includes the Motegi brand for the Hot Hatch and drifting vehicles. Not to miss out, it also includes Asanti and replica wheels for prestige and performance cars. As a Wheelpros distributor we now have the wheel market covered.

North Hants Tyres is now in its 70th year – the original Antique, Classic and American Tyre Importer/Distributor. We are still a family run company, and have grown from the original back garden operation to a staff of 12 (six of whom are family.) North Hants Tyres appreciates your business!